Complete EduKick Football Academy’s 14-week training course and you’ll have the opportunity to experience the trials held from September 10 – December 14. But there are even more ways to get noticed like our football showcase in October!

Our venues give each of our student-players access to superior technical and athletic instructors, an excellent training regimen, and visibility among the better clubs.

Ready to take your soccer playing to the next level?

Time is running out! Fill out the form below to get started.

In a stunning World Cup Final, France beat Croatia 4-2, giving them a victory they have been fighting for since 2006.

Generally, France has dominated the other teams during their World Cup games, but this game was different. Croatia came out swinging and maintained control over France for the first half of the game.

However, France regained their lost footing and took back control of the field during the second half.

This win has given France the morale boost they’ve really needed since their defeat in 2006 and has given us some new football stars to keep an eye on. For example, 19-year-old forward Kylian Mbappé put on an amazing performance, tying as the second-highest goalscorer in the tournament and ultimately receiving the Best Young Player Award.

Mbappé became the youngest French player to score at a World Cup and is the second teenager ever to score in a World Cup Final, an honor he shares with the famous Brazilian footballer Pelé.

Even the torrential rain in Russia couldn’t put a damper on the young French team’s enthusiasm as they celebrated their victory.

This win isn’t only important to France, but also to many ambitious young players who have the skills in their sport that could make them truly great. France’s win will inspire a new generation of players that could one day come to greatness.

Want the soccer experience of a lifetime?

Contact us today to see how we can get you World Class training!
International call direct: +1-905-631-9541 | Skype: edukicksoccer 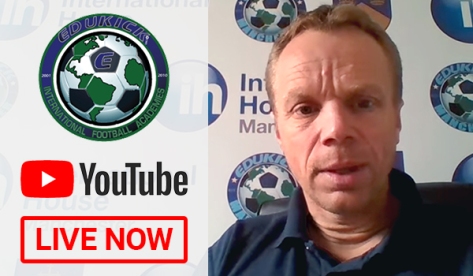 Get the latest updates about our program, the outcomes of games, and so much more!

At EduKick Manchester, our goal is to build each student-athlete to be the best player – and human being – they can be. It’s no surprise then, when we have a season of successes like this one!

Since the season started, EduKick Manchester has seen thirteen players rise to the top through hard work, great coaching and intense training.

This is an EduKick Manchester record! Student-players have headed to trials with professional clubs, signed with semi-professional teams for reserves (as well as first teams!) and more.

Our academy has worked even harder this season to promote our student-athletes through small training sessions with former professional footballers like Frank Sinclair, Jon Macken and Richie Wellens (Manager at Oldham), and hosting Professional Football Association sessions to introduce our students to current players and coaches from professional clubs in the area.

This season, we’ve also taken them to two showcase events in Manchester – where they rub elbows with scouts and representatives from clubs on the lookout for up-and-coming players and fresh talent.

Want to know the names of these talented young men?

These success stories are ramping up for EduKick Manchester, and we’re looking forward to even more opportunities being presented to our student-players here.

Ready to take your game to the next level?

If you’re looking for a high-quality soccer academy that will get you into the absolute best condition of your life, then EduKick Manchester is the only option that will provide you with the education and football experience of a lifetime.

Wondering where you’ll be staying? No worries! During the 22-week course, we offer home stay or student dormitory options. Stay with a host family, or enjoy dorm life with other EduKick student athletes!

Looking to finish high school while you continue your soccer training? With the US Online Distance Learning system, you can complete grades 8th through 12th in the comfort of your own student residence during your stay with us!

Here, at the EduKick Manchester Soccer Academy, we accept student players 16 years of age and up. We offer them the chance of a lifetime with our two 22-week courses:

In addition to EduKick’s Manchester UK’s 22-week course, there is a trial event that allows you to showcase your technical and tactical abilities. Here, professional players and scouts witness your skill on the field – opening up your career to a new world of professional opportunities.

Offered through the 22-week course is:

For Cody, EduKick was a truly amazing experience! He met other boys from all over the world and made lasting friendships. The soccer training and facilities were excellent. The boys received daily training from a professional coach and from that he learned so much in terms of soccer skills and how to develop as a better player.

In my opinion, I think both of those goals exceeded our expectations and I owe it to you guys for helping us find our way over this last year. I want to personally thank you for giving me the confidence that you always had Quinn’s best interests in mind.

You gave me total peace of mind that he was always in a safe environment where he was surrounded by well-intentioned adults who allowed Quinn to mature at his own pace. Much success for the 2013-14 season and I look forward to chatting with you more in the near future.

Have any questions? Call today!

As the game kicked off, Liverpool took the lead, using an aggressive play to take possession of the ball for the first 10 minutes. But EduKick wasn’t going to be outdone so easily. As soon as they found their flow, they took control of the ball and played a passing game, playing from the back end and maintaining possession.

The game remained at an impasse, and by half time, neither side had scored.

As the second half started, EduKick kept their momentum going. However, they started to miss goals and opportunities as the game progressed. Liverpool grabbed at the chance and scored, pulling ahead 0-1.

At the end of the game, despite the EduKick team’s hard work, Liverpool came out ahead with a final score of 0-2.

“[It was] a disappointing result, we just need to have more confidence in that final third to get our shots off and have a go [sic],” said EduKick Manchester head coach Nigel Keogh. “We dominated that game and kept the ball well…If we’d have taken our chances, then we wouldn’t have been in that position. All in all pleased with the effort and performance. They were trying to do the right things, some of the play was great, and we just need to make it pay in that final third; lots to work on for the next game and plenty of positives.”

Wellens’ appearance was both entertaining and informative for the boys at the academy. These potential football stars got the chance to ask Richie Wellens their burning questions during a Q&A session with him.

The students received another surprise when they got to practice with Wellens on the field during their training session. Wellens personally coached them during the field session of his visit, helping the students refine their abilities and techniques.

Wellens currently resides as the first team coach at league two-side Oldham Athletic, which makes him a superb choice for helping these students reach their full potential!

“It’s always great to have these guest sessions at our academy, but especially having Richie involved is fantastic!” said EduKick Manchester Director Mick Brennan. “Richie works a lot with our players in Manchester, and has a great understanding of our ethos in the academy and brings genuine energy and great advice to the sessions he does. The players at Ellesmere would have been able to take a lot for the afternoon with him, and hopefully we can get him along again soon to see their progress. A massive thanks to Richie for the session and talking with the players.”

The first Edukick Manchester independent showcase event on Friday, August 25th, 2017, was a smashing success. All players registered with the program, along with some invited players from a local non-league side, got to show their ability to scouts and representatives from clubs around the northwest.

The afternoon kicked off with a guest session from Leicester City player Richie Wellens. Richie, an English former professional footballer who primarily played as a central midfielder, is currently a first-team coach at Oldham Athletic. He has been to the international academy on a number of occasions for guest coaching sessions.

However, Friday, Wellens personally prepared players for the up and coming showcase event and shared with them his experiences breaking into the professional game. His ability to relay the game from every aspect provided a great enrichment for the players.

After the guest session from Richie, the Edukick boys were put into a showcase game under the watchful eye of one of the Oldham Athletic academy head coaches, Professional Football Scouts Association (PFSA) representation, Adam – one of the Manchester City Academy coaches and the Radcliffe Borough head coach.

In a very competitive game, the players showed great ability, impressing the on-looking representatives with some real success.

The PFSA has requested the details of one of our players, hoping to take him to some of the semi-professional and lower league clubs in the northwest for trials.

Oldham Athletic has offered for four of our players to be invited into the Academy during September in order to: train with the teams, see what a club training environment is like, test their ability against players who have been signed by a professional club and enable the boys to sample first-hand what level they need in order to compete.

Overall the showcase event was a great success for the Edukick Manchester Academy, enabling players to have an opportunity to demonstrate their ability and giving five players the opportunity to progress on to further trials or training!

Follow the news and Facebook updates in the coming weeks to see more about those who are taking these opportunities.

Want to join us for the next Manchester showcase in October? Email us now to book!

Could you be the next International Football Star?

Attending our Academy football trials course for players 16+ is one way to find out!

At EduKick, we offer the footy chance-of-a-lifetime through our EduKick Manchester Football Academy for international footballers age 16+.

As part of EduKick’s Manchester 22-week Football & Education course, we provide 1-day pro trial events in front of scouts & coaches from professional & semi-professional clubs at least 3 times during the duration of the program.

Trials consist of technical and tactical displays, as well as live matches where student-footballers can showcase their skills in front of guest coaches and professional scouts.

Throughout our 22 week academy course, we offer:

Special pricing for players 16+ that register in August.

Call, email or SKYPE us today!

“The training is really high intensity. We have four practices and a game each week,” EduKick student Victor Kasiga says. “The coaches are really patient and take their time between sessions if you are having a problem with the language. They are really good about that.”

“You learn a great deal about fitness, nutrition, and sports methods in relation to football,” he adds.

At EduKick, we strive to provide the best possible training, exposure, and football experience available.

Our 22 week Manchester sessions will include: